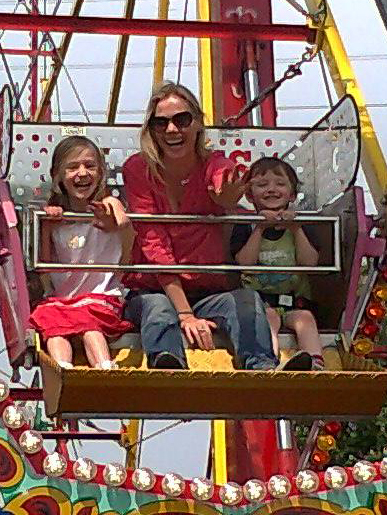 Above: It's not all hard work! Enjoying a day out with the family

So, here I am, a forty-something-year-old mother of two, creator of Free Spirited Natural Skincare, Yoga, Pilates & Holistic Fitness Trainer, and Nutrition & Health Coach. I have a lot to fit in, which can be overwhelming at times, but I love every aspect of my life, and am determined to live it to the full. Here’s a little background into what led me to where I am today.

A lot of health bloggers seem to have suffered a major health breakdown, which is what triggered their journey into a new world of health. I can’t make any claims like this. I have always been fairly health-conscious, but have certainly faced health issues, made a lot of mistakes along the way, and have learnt a hell of a lot over the years in my quest to be the healthiest I can be. It has, and still is, a gradual process of discovery and experience.

I have always been fairly active, loving dance classes as a child, which developed into aerobics and fitness classes as an adult, subsequently leading to me training firstly as an Aerobics Instructor, then as a Personal Fitness Trainer and Yoga & Pilates teacher (with many other styles in between).

As for diet, I became vegetarian at the age of 12 years, and haven’t eaten meat since. It just never felt like a food group to me. By 17 I had taken it further still and become a vegan. However, my awareness of nutrition and cooking was minimal, as my family favoured meat and processed foods, so it was a slow journey of discovery as to how I could eat a healthy plant-based diet. A friend I lived with whilst at University taught me a few basics and made me think more carefully about the nutritional content of my meals.

Throughout the subsequent years I continued to learn a lot about cooking and using a wider variety of plant based foods, but being vegan doesn’t necessarily mean eating healthily. I now cringe at the amount of wheat and soya I used to consume on a daily basis. However, I generally felt very well, and rarely had to see a doctor.

The one issue that did cause me a lot of heartache was the state of my skin. I had suffered from severe acne throughout my teenage years and into my early twenties. I had years of topical antibiotics, benzoyl peroxide and harsh cleansers that stripped my skin of moisture. By 30, I had become aware that although I’d had a handful of years of blemish-free skin, I had started showing signs of premature ageing; a result of years of drying out my skin through my battle with acne. If only I’d realised then how much more effective balancing oils can be!

I started to investigate what I was using on my skin, and was disappointed to discover that most skincare products on the market contained a lot less of the good stuff than they suggested on the label. For example, a cleanser claiming to be gentle with soothing aloe vera actually contained mostly the harsh detergent sodium lauryl sulphate, and less than one per cent of the prized aloe vera! I was also concerned that if the vitamins in the products were supposed to get absorbed through the skin, then what about the unpronounceable chemicals too? So it got me thinking, and there began my journey into making my own natural skincare products. I started off very simply mixing aloe vera gel with jojoba oil, and used this as a cleanser and moisturiser. Along with the addition of rose water, glycerine, tea tree and lavender oil, the condition of my skin dramatically improved.

I began receiving complements about my complexion, and when I explained what I’d been using friends and family asked to try it for themselves. This prompted me to enrol on a series of practical and theoretical training courses to deepen my understanding of treating a variety of skin issues, including sensitive and mature skin types, and started turning my kitchen into a part-time laboratory.

At 34, I had my first child. Being sleep-deprived and low on energy, I made the decision to start eating dairy again as life seemed too arduous to be cooking meals from scratch. I also noticed that I was drinking a lot of coffee and eating biscuits and cakes etc. that, as a vegan, would have been totally off my radar. I wasn’t really eating proper meals, as mealtimes were regularly interrupted by my poor baby crying constantly with reflux and colic, which meant eating with fork in one hand, baby in the other, and anxiety levels that caused my appetite to plummet. I quickly lost the baby weight, but mostly through stress and skipping meals.

I had always suffered from the occasional winter cold, but one particular winter following the birth of my second child was the worst I’d experienced. I seemed to be getting colds on a monthly basis, which would linger and turn into a cough that just wouldn’t go away. I had bouts of sinusitis, ear infections and had developed painful cysts on my neck. I’d been given three courses of antibiotics in a row and was still suffering. Eventually, I got to see a lung specialist who told me I had developed asthma, at the age of 39, and promptly put me on a steroid inhaler. This scared me, as I hate the idea of being dependent on medication.

It was at that point that I decided I had to take matters into my own hands, and with my belief in food as medicine, I booked in to see a naturopath for guidance. The naturopath reminded me of the simple healthy-eating guidelines that I was aware of but had somehow slipped away from, and also sent me off with a selection of homeopathic remedies, high-potency probiotics and herbal tinctures. I followed her advice to the letter, and within six months I had gradually managed to wean myself off the steroid inhaler, and have not needed it since. My skin was also once again completely clear. This amazed me to such an extent that I decided to enrol on a nutrition and health-coaching course through the Institute of Integrative Nutrition, so that I could understand this link with food and health further, and to be able to help others in my situation.

The main dietary changes the naturopath recommended were cutting out wheat and dairy, which I must have been getting a lot of since no longer being strictly vegan.

Nowadays, I still omit refined wheat (but am comfortable with rye and other low-gluten grains) and am happily back to my vegan principles – it’s so easy now that vegan food is everywhere! I take great pleasure in creating colourful, varied, plant-based meals, and have never felt better. I have discovered such an abundance of dairy-free alternatives now compared to 30 years ago when it was soya or nothing, so it has never been a better time to eat well.

My energy levels and ambitions are the highest yet, which is what has spurred me on to pursue my business ventures. I have even taken up new hobbies, like karate with the children, a capella singing and playing the harp!

Thank you for taking the time to learn a little about me, and my journey. I do hope you will share your stories with me too.

To your good health,